Until There's A Cure in Uganda: an explanation of UTAC's granting strategy

An Explanation and Case Study of UTAC Granting
Until There's A Cure is a grant-making organization. Because UTAC commits money to other organizations which provide direct care and services, prevention education and awareness, medical vaccine research, and vaccine development advocacy in the field of HIV/AIDS support, we ask that grant recipients keep us informed of what they do with the money.

While this concept and process appears simple, many of the groups we fund have such limited resources that even producing a report on their own activities takes time and money away from their day-to-day missions. This reporting process is very important on our end, and we so appreciate the extra effort these amazing groups put forth to keep us informed of their successes and challenges -- in the end, it helps us to make better granting decisions in the future, as we learn a great deal about the potential effectiveness of new programs given our previous history with similar projects. In the same way, if we've never seen a program idea before, the after-the-fact final report will serve as a benchmark for future programs and help us guide other groups with their own projects.

As an example of how this final reporting process works, let's take a closer look at a recent grantee organization in Africa. 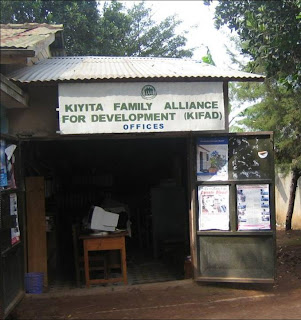 KIFAD and UTAC
In 2007, Until There's A Cure granted the Kiyita Family Alliance for Development (KIFAD) a grant in the amount of $4,000 for their Wakiso Anti-Retroviral Therapy Support Program. We recently received their 2008 annual report, detailing how the grant money was used, the benefits and disappointments of their program, and where KIFAD plans to move in the future. KIFAD is a community group which aims to support People Living With HIV/AIDS (PLWHA) and to prevent infection, treat infected persons, and support community members who are infected. A cornerstone of their efforts is the "dissemination of accurate ART [anti-retroviral treatment] information."

KIFAD applied for a grant to fund their program, which supported the following purpose:

The proposed project also stated a number of objectives, including a focus on increasing an understanding of how to use ARVs effectively, which would "mobilize communities to use prevention, treatment, care and support services," and to increase the number of community members who understand the effectiveness of strong adherence to ART.

The final report details the specific activities that KIFAD undertook throughout the program's duration. Between October 2007, from the receipt of their grant award, to September 2008, through the Wakiso Anti Reotroviral Therapy Support Poject, KIFAD offered:
The Final Report details how the program was monitored and evaluated, and, especially importantly, discusses the challenges that KIFAD encountered during the course of its project. In particular, they faced issues of:
Finally, KIFAD provides us with a breakdown of both the expected outcomes of the project, compared with actual results:
While the project cost remained at $4,000, it's apparent that the testing was more expensive than anticipated, and other items were less expensive. Further communication with KIFAD will determine how their approach will change next year given what's been learned from this extensive, important project.

Hopefully this explanation has given some insight into how Until There's A Cure evaluates the projects of its grantees, as well as how those organizations' final reports, while time-consuming, remain a critical aspect of our grantmaking and administrative process. We deeply appreciate the time these groups put into critically evaluating and reviewing their own work, as it helps both the grantees and UTAC improve the progress of HIV/AIDS care and advocacy.

Note: KIFAD does not maintain a website.
For more information on KIFAD, please visit their VolunteerAbroad page, or write to KIFAD at:
Kiyita Family Alliance for Development
P.O. Box 33995
Kampala, Uganda
Posted by Until There's A Cure at 9:50 AM

Friends of Until There's A Cure

Chat with us on Meebo!